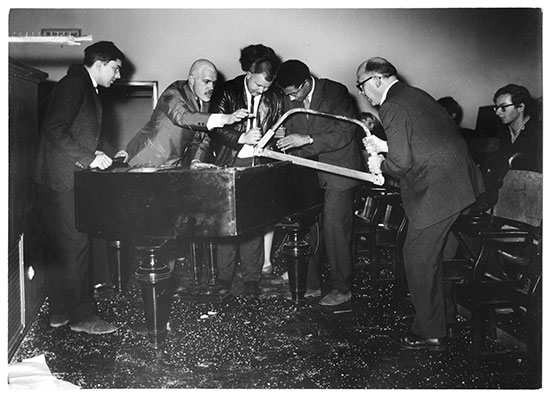 The exhibition offers an initial consideration of scores and musical notation in relation to Fluxus and ZAJ.
Recognized as the most influential artistic movements of the 20th century and the forerunner of entire artistic trends that followed (from conceptual to performance to video-art), they assigned enormous importance to musical production.

Fluxus and ZAJ presented all their own public events as “concerts”. These actions systematically demolished all accepted notions of form and content in music, aiming at the by now obsolete listening conventions and cultural values of classical music.

The term Intermedia (coined by D. Higgins in 1964) defines the assault on separate categories of art and the distance between “musical action” and “action”.

In 1969, John Cage, in collaboration with Fluxus artist Alison Knowles, published “Notations”, a comprehensive anthology of the innovations brought by international experimental music to the functions and methods of notation. This book is the starting point for the project Sense Sound / Sound Sense.